Sony Group Corporation has revealed it has partnered with Theta Labs in order to launch 3D non-fungible token (NFT) assets. The upcoming NFTs will be crafted for the Sony Spatial Reality Display and are designed for three-dimensional viewing.
Sony 3D NFTs to Enhance Spatial Reality Display Features
The Japanese multinational conglomerate corporation Sony is working with Theta Labs, the creators of the Theta blockchain. The Theta project is described as a decentralized video streaming network or video delivery network with its own native crypto asset, theta network (THETA). According to Sony’s announcement sent to Bitcoin.com News, the electronics giant plans to issued ten “Tiki Guy” NFTs, and the firm is issuing two-dimensional versions as well.

The NFTs are created for the Sony Spatial Reality Display (SRD), a tablet that leverages technologies like augmented reality and 3D enhancements. Sony’s official Youtube channel published a video that showcases the SRD device and the

In December, Ubisoft debuted the Quartz NFT platform, which allows players in Ghost Recon Breakpoint to buy (or…
przez 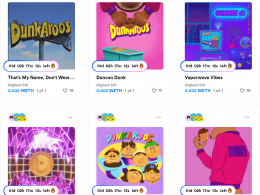 American food company General Mills has released its first nonfungible tokens (NFTs) with Dunkaroos, as per a tweet…
przezShaurya Malwa

AMBCryptoThese metrics show it’s possible for Litecoin to bounce back

The last couple of days have been quite deterring for most alts. The market’s 17th largest crypto, Litecoin…
przezLavina Daryanani