Yet again, the cryptocurrency market is predominantly in the red as Bitcoin (BTC) struggles to reclaim the  $40K mark. On the other hand, major altcoins like Ripple (XRP) and Dogecoin (DOGE) marked some gains and are up respectively by 5% and 4%.
Bitcoin Hovering at $40K
Despite some green movements, the first half of April has not been gentle to the crypto markets. Bitcoin, for one, started the month at nearly $46,000. Since then, it passed through some significant turbulence and, at one point, dropped below $40K.
Yesterday (April 14) was a relatively positive day for the leading digital asset as it maintained $41K and even crossed $42K at some point. Nonetheless, earlier today, following the red trading session on Wall Street, the bears took control and pulled BTC below $40,000 once again.
BTC managed to recover some of the losses and is currently trading at slightly more than $40K, which is approximately 2.5% less than its USD valuation 24 hours ago. Its total market capitalization

ShuaCoin is the very first token that has been created on Bitcoin via Fabriik’s SFP, Joshua Henslee is…
przezPatrick Thompson

AMBCryptoIs the shift to ‘newly created and technically-superior’ cryptocurrencies inevitable

Cryptocurrency has seen a significant rise in demand over the years. In his article titled The Osmosis Theory…
przezShubham Pandey

Chinese Users of KuCoin Have Until December 31st to Close Accounts 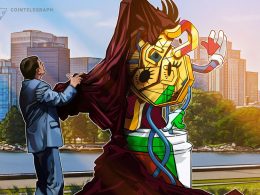 How much is too much? Crypto art market brings together deep pockets and big artists

In the future, owning unique art won’t be restricted to the elites, but will everyone have digital art…
przezAndrew Singer