XCC is positioned as a supporting mechanism to XCLAIM, a protocol which acts as the foundational layer for Interlay’s Bitcoin one-to-one backed asset interBTC.
Interoperability network Interlay has released a 21-page technical whitepaper, titled XCC: Theft-Resilient and Collateral-Optimized Cryptocurrency-Backed Assets, advocating for the imminent development of cross-blockchain interoperability solutions to unlock a plethora of potential within the decentralized finance (DeFi) ecosystem.As a Polkadot parachain, Interlay is focusing its efforts on opening pathways of communication and interaction between Bitcoin’s currency-native ecosystem, with the wider functionalities of the DeFi space with networks such as Ethereum and Polkadot. The newly-launched XCC protocol — serving as an additional layer of XCLAIM which was introduced to the market in 2018 — enables greater asset sovereignty during cross-chain activities suc

Why Bitcoin’s bull run is all about bonds

Bitcoin’s decoupling with Gold and its inverse relationship with stocks has been covered widely by mainstream media. The…
przezEkta Mourya 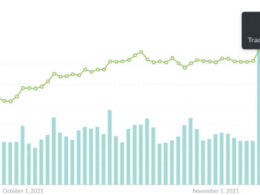 Will Bitcoin’s Taproot upgrade cause a “DeFi rain”?

On Nov. 14, the highly anticipated Bitcoin upgrade Taproot was activated on block 709,632 with the aim of…
przezFootprint Analytics

Though landlocked, Laos is famous for its splendid waterfalls and consequently, its hydroelectric potential. Last month, the Laotian…
przezSahana Venugopal