230 Million SHIB Token Burned ; Is This Bullish For The Memecoin?

Shiba Inu (SHIB) holders are determined to bring the circulating supply of the memecoin to profitable levels. Per data from Shibburn, over 230 million SHIB tokens have been burned in the last two days.
SHIB rises as token burns increase
The platform which monitors ongoing transfers of SHIB tokens to designated “dead wallets” revealed that there was a single burn transaction of over 168 million SHIB tokens during the period. The last day also saw around 32 million SHIB tokens burnt, with the burn rate falling 86.23% from the previous day.
The community is carrying out token burning to reduce the supply of SHIB which started at 1 quadrillion. About 41% of this initial supply has now been incinerated so far in a bid to raise the price of the token.
In a recent blogpost, the core developers of the memecoin also revealed that an official token burn portal was in the works for the ecosystem. This mechanism would burn tokens through ecosystem utilities, they added.
A Burn Portal for SHI 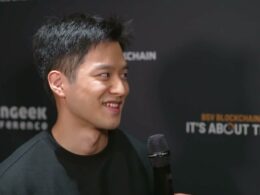 Jeffrey Baek on CoinGeek Backstage: How to send BSV on the Internet and social media

Jeffrey joined CoinGeek’s Patrick Thompson on the sidelines of the CoinGeek Conference in New York, where they talked…
przezEd Drake