Run-DMC’s McDaniels at SXSW: Blockchain can take the power back for artists

“The creator is where the power begins, and that’s where the power should stay”, states Run-D.M.C’s Darryl McDaniels.
Cointelegraph’s senior reporter, Rachel Wolfson visited South by Southwest (SXSW) — a ten-day annual technology, film and music festival based in Austin, Texas — to connect with, and interview, a melting pot of pioneers, luminaries, and enthusiasts from the crypto, blockchain and Web3 industries.Wolfson spoke to Darryl McDaniels — known culturally as DMC — founding member of the infamous New York hip-hop trio Run-D.M.C, about the group’s illustrious discography, his views on the capitalistic-induced flaws within the traditional music industry, as well as his overarching vision in collaboration with blockchain project The Song That Owns Itself (STOI)) to advance decentralized digital ownership.Run-D.M.C. achieved colossal success across the 80’s and 90’s with multiple acclaimed albums and tr 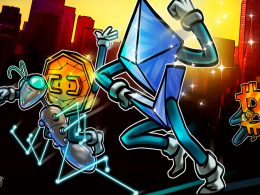 Second layers will save the day in 2021, bolstering Ethereum and DeFi

In 2021, we’re likely to see a lot of crypto industry players adopt sidechains and parachains to provide…
przezChandler Song

When it comes to the growth of crypto adoption, Africa and Asia lead the world: Of the top…
przezAnjali Sriniwasan

Even though the altcoins were noting an increase in momentum a few days back, most of them are…
przezNamrata Shukla