Biggest Movers: AVAX, RUNE up Over 10%, as CAKE Surges 20% on Thursday

AVAX was once again higher on Thursday, rising for its fourth consecutive session, as it further cements itself in the crypto top ten. Although RUNE was also trading by as much as 15% higher, it was CAKE that led Thursday’s gainers.
Pancakeswap (CAKE)
Pancakeswap (CAKE) rose to its highest level in almost four weeks on Thursday, as it moved away from its recent lows.
Following a bottom of $5.37 on Wednesday, which was close to a one-year low, CAKE/USD climbed by as much as 21% today.
CAKE rallied to an intraday high of $7.19 in Thursday’s session, which is its highest level since February 21.

This high came as price strength also gained, blowing past its recent ceiling on the 14-day RSI indicator in the process.
Since passing the resistance of 42, the RSI is now tacking at 50.65, which is marginally above another ceiling at 49.15.
Should this momentum continue, we could see CAKE tracking at $8.35.

Ray Dalio: If Bitcoin Succeeds, Regulators and Governments Will Try to Kill It

If the primary cryptocurrency’s mainstream adoption continues and the asset succeeds, regulators and governments will kill its progress,…
przezJordan Lyanchev 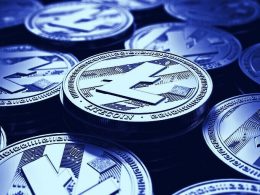 Grayscale Bought 80% of All Litecoin Mined in February

The IOTA Foundation is releasing the beta version of the Firefly wallet today. Future versions of Firefly are…
przezJake Simmons