A group of individuals — seemingly a small team backed by a large community — is raising funds with a unique goal: to purchase one of the earliest prints of the U.S. Constitution.
The print is one of thirteen surviving copies of the Official Edition of the Constitution, out of the 500 that were first issued for submission to the Continental Congress. According to Sotheby’s, where the auction will take place, this was the very first appearance of the Constitution in its final form. According to Sotheby’s senior vice president Selby Kiffer, just two such copies are in private hands.
The group’s plan is to underpin the effort with a decentralized autonomous organization or DAO. Community-led, with ownership usually dictated by owning a token or an NFT, decisions within DAOs are typically made through votes conducted by token holders. In recent times, some DAOs have amassed large treasuries and some have made notable purchases, such as buying a rare Wu-Tang Clan CD for $4 million

One of the largest Bitcoin whales has resurfaced with the purchase of over 596 Bitcoin yesterday, data from…
przezJuhi Mirza 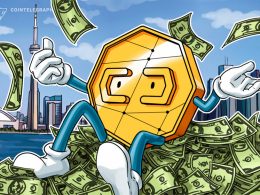 US bank Goldman Sachs has launched a cryptocurrency trading team, as per a report this morning on news…
przezShaurya Malwa