Kishu Inu price forms a descending triangle pattern, hinting at 61% correction. The decreasing trading volume and the position of the SMA above the KISHU price show that recovery is a huge challenge.
Kishu Inu price has been suffering under the strong arms of the bears since the all-time high of $0.000000010 traded on October 28. These losses tested area under $0.0000000040 to the extent of confirming support at $0.000000003582. Recovery attempts have been numerous, but KISHU has not made significant progress toward the record high.
Kishu Inu was created in April 2021 with the aim of being a decentralized meme project with true utility. KISHU’s mission is to bring popular cryptocurrency concepts to the mainstream. Unlike older, comparable projects, KISHU introduces holders to next-gen concepts such as participation rewards, NFTs, decentralized exchanges, and more.
It has rallied recently in tandem with other meme coins even as the big brothers DOGE and SHIB had a showdown of the meme 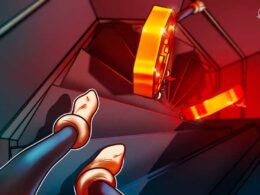 OMG price crashes by one third after BOBA airdrop snapshot

Twitter CEO Jack Dorsey’s affinity to Bitcoin is well documented, with the exec frequently espousing the cryptocurrency on…
przezAnjali Jain

Users Can Now Book Flights With Dogecoin (DOGE) on AirBaltic

Latvia’s flag air carrier, airBaltic, has reaffirmed its pro-cryptocurrency approach by enabling customers to make bookings with other…
przezJordan Lyanchev