Bitcoin Crashing Below $45K As $160B Evaporated from the Market Cap

Bitcoin has failed to maintain its price above $50,000 and has lost another substantial chunk of value after dipping to $45,500. The altcoin field is deep in the red as well, and the crypto market capitalization has decreased by more than $160 billion in a day.

Bitcoin Slides $7K in a Day

After the past several days in which BTC plummeted from $58,300 to $45,000, yesterday seemed somewhat bullish for the cryptocurrency. Bitcoin reclaimed $50,000 and continued upwards to a high of about $52,000.

This increase came amid reports that institutional investors have reaffirmed their belief in the primary digital asset by withdrawing $650 million in BTC from Coinbase.

However, the gains were short-lived as the bears interfered and drove the asset south again. In the following hours, bitcoin started nosediving and reached an intraday low of $44,500. In other words, the cryptocurrency lost nearly $7,000 of value in less than 24 hours.

Consequently, BTC’s market capitalization also fell to about $860 billion. Earlier this week, the metric was well above the $1 trillion mark.

The situation within the altcoin field seems even worse with substantial price losses. Ethereum leads this adverse ranking with a 10% decline to $1,460. It’s worth noting that the second-largest cryptocurrency is down by $600 since its ATH registered last Saturday.

Cardano seems to have the least negative reaction to this crash as ADA is just 4% down and still trades around $1.

Ultimately, the cumulative market capitalization has lost nearly $170 billion since yesterday’s peak and is beneath $1.4 trillion. Moreover, the market cap is down by $360 billion in the past five days. 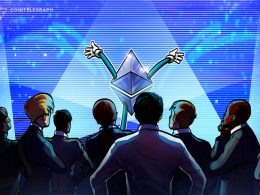 Futures traders are increasingly bullish on Ether price in the short-term with $2,500 now in play. Now that…
przezMarcel Pechman