The recent Bitcoin bull run helped Coinbase pull in a profit of $322 million on revenues of over $1.2 billion in 2020, putting the cryptocurrency giant in a strong position as it prepares to sell its shares to the public in its upcoming direct listing on the Nasdaq.

The figures, disclosed in an S-1 regulatory filing, give the first detailed look at the financial performance of Coinbase, which launched in 2012 as a user-friendly way for consumers to buy Bitcoin, but which has since added a professional trading platform and a variety of banking-like services for the burgeoning cryptocurrency industry. The company first disclosed its intent to go public in December.

The jump is not surprising given that Coinbase earns the bulk of its revenue on trading commissions, and that interest in cryptocurrencies surged late last year as the price of Bitcoin rose from around $10,000 in September to over $30,000 by the end of the year. Bitcoin is currently trading around $50,000.

In a letter to investors, Coinbase founder and CEO Brian Armstrong said: “Coinbase is a company with an ambitious vision: to create more economic freedom for every person and business. Everyone deserves access to financial services that can help empower them to create a better life for themselves and their family, but today we’re a long way from that vision.”

Coinbase, which has recently been valued at $100 billion, is one of the most hotly anticipated public offerings of 2021. And like other buzzy Silicon Valley unicorn offerings such as Palantir, Spotify, and Slack, Coinbase has chosen to forego the traditional IPO process in favor of a direct listing—a process that allows firms to float their shares directly on the market, instead of Wall Street banks lining up underwriters and setting an opening price.

Coinbase Direct Listing (Formerly IPO): Everything You Need To Know

Until recently, companies that chose to list directly could not float new shares, only sell existing ones. But a December order by the SEC changed that rule such that firms can issue new shares through direct issues, increasing the potential amount of money they can raise.

In the case of Coinbase, the company’s share prices have been trading around $300 on private exchanges. That could be a key clue in determining what price Coinbase chooses for its debut, though a person close to the company says this will not be the only factor in the pricing decision.

The arrival to the public markets of Coinbase, which will list under the ticker symbol COIN, is not only a milestone for the company and its co-founders, but for the cryptocurrency industry as a whole. A high valuation for Coinbase when it hits the public markets will provide an important benchmark as investors look to put a price tag on a raft of other crypto companies, including exchanges and storage providers.

It will also be an important symbolic moment for the crypto industry.

For years, governments and law enforcement agencies have stigmatized cryptocurrency as little more than a tool for criminals and hucksters, while pillars of the financial establishment—including Warren Buffett and JP Morgan CEO Jamie Dimon—ridiculed it as “rat poison” and worse. But such perceptions have shifted remarkably in the last two years, in no small part thanks to Coinbase, which has forged banking relationships with Goldman Sachs and JP Morgan, and helped companies like Tesla make major Bitcoin purchases.

Coinbase’s public listing will mark another major moment in crypto’s evolution towards mainstream maturity and respectability.

This story is being updated with more details.

The US Intends to Employ Crypto Tracing to Fight Ransomware Attacks 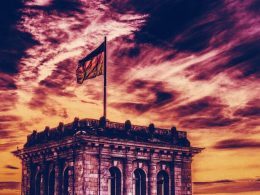 Debate Rages on Whether a Digital Dollar Will Unleash Inflation

Some speculate that if the Fed implements a digital dollar, soaring inflation will soon follow.
przezOmkar Godbole