Fidelity Charitable, the charity unit of the financial services giant Fidelity, collected $28 million in donations in the form of cryptocurrency, according to a report detailing its annual efforts.

The $28 million figure represents a notable jump from the $13 million Fidelity Charitable collected in 2019.

“After a long period of volatility, the value of cryptocurrency soared at the end of 2020—leaving many cryptocurrency holders with significant appreciation of their assets. Fidelity Charitable’s ability to accept bitcoin and other cryptocurrency donations allows donors to take advantage of the surge in appreciation to benefit charity. By donating these assets, the donors could eliminate the significant capital gains on the appreciation while giving the full fair market value to charity,” the report explained.

Two-thirds of Fidelity Charitable’s total contributions were from non-cash assets, according to the report, and $1.6 billion worth of those were from non-publicly traded assets, such as private stock or cryptocurrency.

The block reward miner has completed the purchase of two data centers in Quebec, Canada. This follows an…
przezJacob Rozen 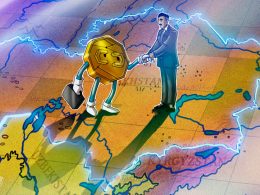 The woman allegedly presented a sum of over $5,000 in bitcoin to a dark web admin as proof…
przezSebastian Sinclair