Industry Leaders Weigh in on Dogecoin Frenzy: Is it Good or Bad for Crypto?

What started as a joke coin has turned into a frenzy endorsed by the world’s richest man Elon Musk, the Winklevoss twins, Snoop Dogg, and numerous others. However, some crypto proponents have highlighted the risks and dangers of this Dogecoin interaction as the token’s market capitalization has exceeded $10 billion.

The CEO of Tesla and SpaceX is arguably the most well-known supporter of Dogecoin. He has frequently praised the cryptocurrency, sometimes with comical comments, which has resulted in an immediate price increase for the asset.

Since the GameStop fiasco, though, Musk has been even more vocal about the Shiba Inu-inspired meme coin. Being one of the most influential individuals, his words attracted the attention of others.

Consequently, names such as the popular US rapper Snoop Dogg and the Gemini co-founders Cameron and Tyler Winklevoss were amongst the people that joined the frenzy. Dogecoin even reached mainstream media with publications on CNBC and Bloomberg.

Somewhat expectedly, this massive interest reached retail investors as Google searches for the meme coin surpassed even Bitcoin in the US. Naturally, all of this growing demand ultimately affected DOGE’s price as the token’s market cap surged to over $10 billion, and it found a place in the top ten largest cryptocurrencies.

Musk recently doubled-down on his support about DOGE by saying that it “appears to be inflationary, but is not meaningfully so (fixed # of coins per unit time), whereas BTC is arguably deflationary to a fault.”

Doge appears to be inflationary, but is not meaningfully so (fixed # of coins per unit time), whereas BTC is arguably deflationary to a fault.

Transaction speed of Doge should ideally be a few orders of magnitude faster.

What About The Risks?

While the aforementioned names have been promoting Dogecoin, Galaxy Digital’s CEO Mike Novogratz warned people of potential risks and a plausible “poor” ending for investors following the FOMO.

He advised that people should avert from a coin that “doesn’t have a purpose” and would be better off with Bitcoin, Ethereum, and DeFi tokens.

Binance CEO Changpeng Zhao perhaps summarized the entire situation with Dogecoin best. He noted that the meme coin has a prominent PR manager in the name of Elon Musk and is also “cool and fun.”

However, he outlined that although the coin should be decentralized since it’s “abandoned in a sense,” one address holds nearly 30% of all tokens, while the top 20 contain more than half of the coins.

It wouldn’t be a cryptocurrency discussion on Twitter without the involvement of the full-time Bitcoin (and crypto) basher – Peter Schiff. The economist didn’t take long and took several jabs at Dogecoin and, staying true to himself, attacked BTC as well.

Firstly, he claimed that Musk is trolling the crypto community by touting Dogecoin, which somehow “shows that Musk knows Bitcoin isn’t truly scarce.” According to the gold-bug, “the joke is clearly on anyone buying Bitcoin due to Musk’s tweets.”

By touting #Dogecoin, a crypto started as a joke, @elonmusk is telling the #Bitcoin community he’s been trolling them. Picking Dogecoin out of over 8,400 altcoins shows that Musk knowns Bitcoin isn’t truly scarce. The joke is clearly on anyone buying Bitcoin due to Musk’s tweets.

Later, Schiff accused Tesla’s CEO of running a new Ponzi scheme with DOGE as he recently regretted being late to the Bitcoin scene. Nevertheless, Schiff believes that “Dogecoin is better at being Bitcoin than Bitcoin,” despite his views on the meme coin. 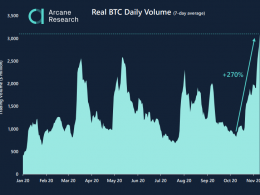 According to the data from Arcane Research, the spot volume of Bitcoin has reached a new yearly high.…
przezJoseph Young

Inside ETH 2.0, parachains, and NFTs with Peng Zhong of Cosmos

This week on Cryptonites saw host Alex Fazel catch up with Peng Zhong of Tendermint, a developing and…
przezShaurya Malwa

4.5 million adult citizens will receive an airdrop of $30 Bitcoin (BTC) each from the government of El…
przezOluwapelumi Adejumo