“Alt-season is here,” Tyler Swope, a popular trader, analyst and YouTuber believes. “I’ve been saying its alt-season since the beginning of January.”

Tyler, better known to his fans as Chico Crypto, pointed to the steep decline in Bitcoin dominance by over 10% in less than a month. This indicates that altcoins are making up ground and are the best investment for the next few months. With this in mind, he composed a list of altcoins that he believes will make incredible gains over the next few months.

The first altcoin on his list is Chi Gastoken, a token launched by 1inch exchange in June last year. It aims to facilitate transactions on the Ethereum network, doing “the same work but with less gas.” Tyler predicts that Ethereum’s gas fees will keep rising, and with it, the value of Chi Gastoken.

Compound is on Tyler’s radar as well. The decentralized borrowing and lending protocol has been one of the standout performers in the DeFi rally. The trader expects this growth to accelerate even further. He claims that credit card giant Visa is most likely going to partner with Compound on a product soon.

“I have a pretty strong feeling that Compound is Visa’s DeFi,” he claimed.

More gems to invest in

Another token investors should be monitoring is Sora, a Polkadot based project. The project released its 2020 year in review post just days ago, looking at its milestones in 2020. They included a CBDC on its network for the King of Cambodia and Japan’s first live blockchain payments system. It’s also been targeting the ballooning DeFi sector with its decentralized economic system.

Why I’m bullish on Sora in the short term is that in Q1, they are having a big airdrop and Sora holders are going to get their validator tokens.

#VAL is the token to incentivize validators to reward validators that participate in #SORA network.#? pic.twitter.com/ijPLLlaMSf

Tyler is also keeping an eye on the Energy Web Token, an altcoin targeting a low-carbon, customer-centric electricity system. He believes that the new president Joe Biden will be good for the token. In addition, Gavin Wood, the founder of Polkadot, is one of the founders of the Energy Web Organization. He touts the token as “the most solid in his portfolio.”

Tyler, however, cautioned against investing in the Energy Web Token as a short term venture. The organization behind it is looking to build a sustainable model for the future of energy exchange. This will take time and investors must be patient if they want to profit off of the token. 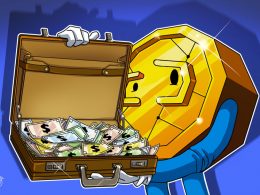 The combined market cap of all cryptocurrencies reaches $2 trillion for the first time. The market capitalizations of…
przezJoseph Young

Altcoins, more often than not, tend to dance to Bitcoin’s tune and this has resulted in the altcoin…
przezJude Lopez

Global regulators have always branded cryptocurrencies, especially bitcoin, as a tool for illicit activities such as money laundering…
przezMandy Williams