A ratio that measures the amount of Bitcoin compared to stablecoins has fallen back to levels usually indicative of bullish buying momentum.

On-chain analytics provider Glassnode noted the ratio in its latest report stating that the Bitcoin Stablecoin Supply Ratio (SSR) has been declining in 2021 as more stablecoins are minted. When the SSR is low, there is a large supply of stablecoins relative to BTC, which indicates more buying power ready to flow into BTC and other crypto assets.

“Furthermore, many of these newly minted stablecoins are being deposited onto exchanges, meaning that they are highly liquid and ready to buy up assets such as BTC.”

As reported by CryptoPotato, the amount of stablecoins on exchanges has surged so far this year, especially for the one with the second largest market share, USDC.

Glassnode observed that the fact that the SSR is so low, even as BTC maintains high prices, demonstrates just how many new stablecoins have entered the ecosystem recently.

Over a billion of Circle’s dollar-pegged coins have been minted since the beginning of the year and around 90% of these have ended up on exchanges according to the research.

“The number of USDC on exchanges increased by over 112% in January alone, growing from $431 million to over $915 million. This represents almost $1 billion worth of buying power from USDC alone, poised to move into assets such as BTC.”

Circle has also integrated their payments platform into Blockfolio’s new trading app which is also good news for USDC.

Analyst Willy Woo pointed out that we are now in the “first great consolidation of the 2021 bull market” but there are a number of charts and metrics such as the Bitcoin Spent Output Profit Ratio (SOPR) that remain bullish.

While we are in the first great consolidation of the 2021 bull market, here’s a bunch of charts to get the feel of where we are in this bull cycle.

He added that profit-taking has now completed as the SOPR has bounced off the bottom indicating that there are no more sellers willing to sell at a loss.

At the time of press, Bitcoin was changing hands for $34,000, right in the middle of its range bound channel. The asset was retreating from an intraday high of $34,700 but had bounced off its daily low of $33,150.

There is still a lot of momentum and positive vibes bubbling under the surface with bigger industry names and celebrities tweeting about Bitcoin. There have been a few higher lows but the support floor just below $30k is still holding for now.

This summer will be awesome for cryptocurrencies, as Phemex plays a significant role in increasing the use of…
przezNews Desk 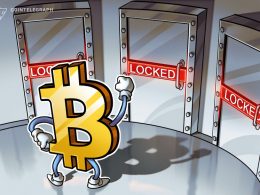 What are Bitcoin mixers, and why do exchanges ban them?

Bitcoin transactions are easy to trace, except when the sender uses a mixer to muddle the link between…
przezMarcel Pechman