Blockchain proponents claim that agricultural asset-backed tokens would make it easier for farmers in Argentina to attract investment and access liquidity amid a nationwide economic crisis.

Argentina’s brittle economy — stricken by endemic problems that have only worsened amid the COVID-19 pandemic — has sparked rising unrest in the country’s agricultural sector. Earlier this month, representatives of the bulk of national producers rejected President Alberto Fernandez’s government’s decision to suspend all exports of corn as part of its efforts to stem inflation and exert downward pressure on domestic corn prices.

The farmers’ strike followed a similar wave of resistance in the oilseed and soy industries last December. The rise in labor unrest poses a challenge for the stewards of the national economy, given that agriculture contributes 60% of national exports and roughly 10% of Argentina’s GDP.

With the peso in freefall, some overseas entrepreneurs are seeing an opportunity for the uptake of a technology-driven solution that could provide an alternative to help farmers weather Argentina’s prolonged economic distress. In particular, CoreLedger and tech firm Abakus intend to launch a peer-to-peer marketplace that would establish a digital, blockchain-based “barter economy” between agricultural producers in Argentina.

Tokenizing agricultural assets, the partners claim, would help farmers to hedge against inflation and access liquidity both nationally and internationally. Such a marketplace would enable the exchange of tokenized titles by farmers for any other tokenized asset on the platform — essentially establishing a form of parallel, asset-backed currency for local producers.

Abakus CEO Martin Furst contends that this set-up would bring “greater agency to farmers,” whereas the CEO of CoreLedger, Johannes Schweifer, claims that the approach could offer critical relief. Unlike cash and stock-based saving plans, their argument is that agricultural-backed tokens functionally become stablecoins, backed by physical assets, and are therefore well-suited to a domestic context stricken by currency devaluation. Schweifer argues:

“In an inflation-stricken country, access to physically-backed assets can be the difference between surviving and thriving for these farmers.”

In the aftermath of a 3.8% rise in consumer prices last October, persistent peso volatility and tensions in government amid the country’s ongoing, fraught negotiations with the International Monetary Fund, local producers may indeed be more receptive to trying alternative fintech strategies that can help them to escape the ruinous economic dynamics in the country.

Why Satoshi Chose Halloween to Release the Bitcoin White Paper 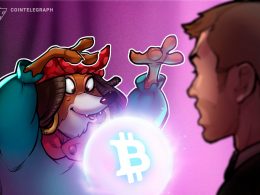 Scott Minerd seems convinced that a huge price correction is imminent, as industry names line up to disprove…
przezWilliam Suberg

Craig Wright and a brief history of Bitcoin

Dr. Craig Wright now finds himself as the perfect plaintiff to demonstrate the points he has been making…
przezJordan Atkins

Many of the market’s altcoins gained significantly on the price charts around the 17th and 18th of January.…
przezJibin George