The IOTA Foundation continues to expand its presence in the United States. As announced yesterday, the Austin Technology Council (ATC), a non-profit organization founded back in 1994, is adding the IOTA Foundation to its council. In its announcement via LinkedIn, the ATC wrote:

Austin’s Silicon Hills is one of the largest tech hubs in the U.S. and has a reputation similar to Silicon Valley. The ATC describes itself as “the voice of Central Texas’ diverse and thriving tech industries.”

According to the Austin Technology Council, Austin tech companies contribute $21.5 billion annually to the regional economy and support more than one-third of local jobs. The ATC includes 280 companies, 1,600 executives and more than 60,000 employees.

In a post on the IOTA Foundation’s admission to the ATC, the nonprofit praises the IOTA Tangle, which offers “unique technology” to solve three fundamental problems of blockchain technology: high fees, scaling and centralization. Furthermore, the ATC states:

It is an open-source protocol connecting the human economy with the machine economy by facilitating novel Machine-to-Machine (M2M) interactions, including secure data transfer, fee-less micropayments, and secure access control for devices.

The head of mobility and automotive at IOTA Foundation, Mat Yargar, commented on the new partnership via Reddit as follows:

You caught me, lol thanks. We haven’t pushed it out yet, but I can confirm that we have joined in with the leading community organizations here in Austin, like ATC, in an effort to increase our presence and extend what we’re currently working locally.

Could people (who are still unconvinced) change their perspective about Bitcoin? A host of companies now look to…
przezAlisha Roy

In the summer of 2016, the value of all crypto in the world was not quite $10 billion.…
przezAndrius Miron 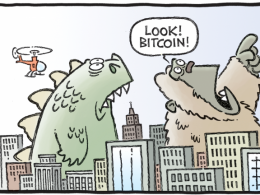 Analysts at Hedgeye Risk Management, an investment research and financial media company based in Stamford, Connecticut, have analyzed…
przezBitcoin.com PR