One of the largest cryptocurrency exchanges in Europe, Bitstamp, yesterday responded to the U.S. Securities and Exchange Commission’s (SEC) action against Ripple Labs. Trading and deposit of XRP will be halted for all US customers as of 08 January. Within a press release Bitstamp informed:

In light of the recent SEC filing against Ripple Labs Inc., which alleges that XRP is a security, we are going to halt all trading and deposits of XRP for our US customers on 8 January 2021 at 9 PM UTC.We will closely follow the unfolding situation and continue to adapt accordingly.

However, as the Luxembourg-based exchange also announced, US customers will still be able to withdraw XRP from Bitstamp. Customers from other countries are not affected.

After three rather smaller cryptocurrency exchanges reacted to the decision so far with CrossTower, Beaxy and OSL, Bitstamp is now the first well-known exchange. According to Coinmarketcap, Bitstamp is currently the seventh largest spot exchange in the world. The trading pair XRP/USD pair generated a trading volume of $120 million in 24 hours yesterday.

However, not only cryptocurrency exchanges, but also investment funds are currently reacting to the SEC complaint against Ripple Labs. Two days ago, Galaxy Digital, Jump Trading and Bitwise, three renowned crypto investment firms, announced the suspension or halt of trading XRP.

With Sarson Funds, another investment fund is now following suit. The Indianapolis, U.S.-based firm said it will remove XRP from all of its products, the Large Coin, Small Coin, Crypto & Income and SmartCrypto funds.

We are liquidating all XRP positions as recent actions taken by the SEC have disqualified XRP from our investment profile. Please reach out if you’d like to discuss. We are making this decision for the betterment of our clients.

As CNF reported, the SEC filed a lawsuit Tuesday against Ripple Labs and its two executives, CEO Brad Garlinghouse and co-founder Chris Larsen, accusing them of raising more than $1.3 billion via an ongoing unregistered securities sale.

As a result of the lawsuit, cryptocurrency exchanges worldwide could be forced to stop trading XRP. Otherwise, those that keep the token listed on their platforms could risk being sued as well if the SEC wins the case and the court classifies XRP as an unregistered security. 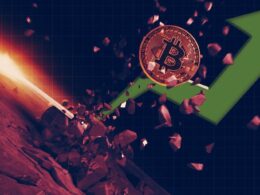 Bitcoin’s current price of $63,900 is within touching distance of the flagship cryptocurrency’s all-time high of $64,804, and…
przezScott Chipolina