Not too long ago, the author of the controversial bitcoin stock-to-flow (S2FX) price model said that the model was “perfectly on track.” On Sunday, November 8, the S2FX creator known as “Plan B” reiterated his belief in the model and told his Twitter followers that he has “no doubt whatsoever” that the S2FX trend is correct.

This weekend the stock-to-flow (S2FX) author dubbed “Plan B” tweeted about his model and how he still believes in the S2FX trend. Plan B’s popular editorial called “Modeling Bitcoin’s Value with Scarcity” has caught the attention of the community for quite some time. The current trend suggests that if BTC’s price follows the S2FX model it could be around $100k by December 2021.

Stock-to-flow, also known as S2F or S2FX for the most recent model, is a cryptocurrency technical analysis (TA) that leverages BTC’s “stock” and “flow.” “The ‘Stock-to-flow’ is a number that shows how many years, at the current production rate, are required to achieve the current stock. The higher the number, the higher the price,” explains the live chart tracking website with the stock-to-flow model applied to BTC’s current price.

During the first week of August, Plan B told his 148,000 Twitter followers that his model was “perfectly on track.” This past Sunday, Plan B doubled down on his words and told the crypto community that he has zero doubts about his model and he wholeheartedly believes in S2FX.

“People ask if I still believe in my model,” Plan B tweeted. “To be clear: I have no doubt whatsoever that bitcoin S2FX is correct and bitcoin will tap $100K-288K before [December] 2021. In fact, I have new data that confirms the supply shortage is real. IMO 2021 will be spectacular,” the analyst added.

Following Plan B’s statements, a person replied to his tweet and said: “What is your skin in the game? You’re anonymous. If your model fails you can just delete Twitter and disappear.” The anonymous analyst responded and said that his anonymity makes S2FX more appealing.

“You don’t seem to understand,” the S2FX author replied. “One of the reasons for me to be anonymous is that I do not want you to trust me (based on my credentials), I want you to verify everything I say, and make your own conclusion. Also, I might go dark when my model succeeds, not fails. Few understand.”

A few other Twitter users said that they loved Plan B’s confidence and thanked him for his contributions. Despite the fact that there’s a number of cryptocurrency proponents and analysts who don’t believe in the S2FX model, a great number of enthusiasts think it will come to fruition.

“If the history of Bitcoin repeats itself,” one fan tweeted. “Bitcoin [will] overshoot and top at around $335k. – in this perfect parallel channel. Hello FOMO. [Four] year period between tops. “Take profit at $335k/2 = $165k which is the target according to ‘stock to flow model,’” the individual added. 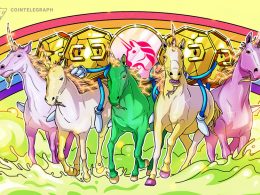 Uniswap v3 starts off with a whimper, not a bang, and grifters galore in this week’s Finance Redefined.…
przezAndrew Thurman 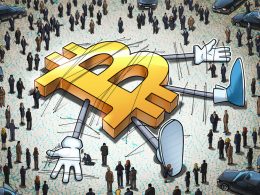 BTC dropped below $56,000 on Sunday as several bearish signs emerged. The price of Bitcoin (BTC) dipped below…
przezJoseph Young

IOTA is on Renault’s short list of compatible DLTs, says VP of blockchain